The debate took place on the 21 January 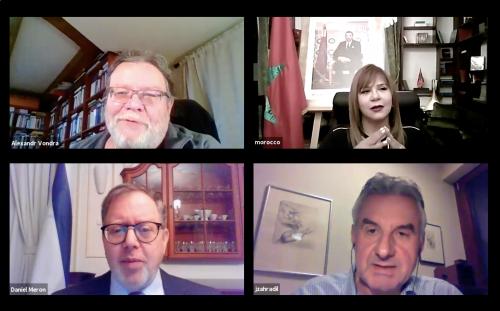 Organized in cooperation with European Conservatives and Reformists (ECR) political group of the European Parliament.

The debate took place a day after the inauguration of new a new US president Joe Biden. The discussion was titled Arab – Israeli Thaw: Triumph of U.S. Foreign Policy. We invited the Moroccan ambassador Hanana Saadi, the Israeli ambassador Daniel Meron and a member of European Parliament Jan Zahradil to talk about the, undoubtedly, biggest success of the Trump administration in the field of international relations: the agreements between the state of Israel and the Emirates, Bahrain, Sudan, and the Kingdom of Morocco. The event was moderated by the chairman of the PCTR board Alexandr Vondra. The debate that took place on the 21st of January focuses on the benefits and improvements to the relationship between the above-mentioned countries the agreements brought. It also investigated their influence on European security.